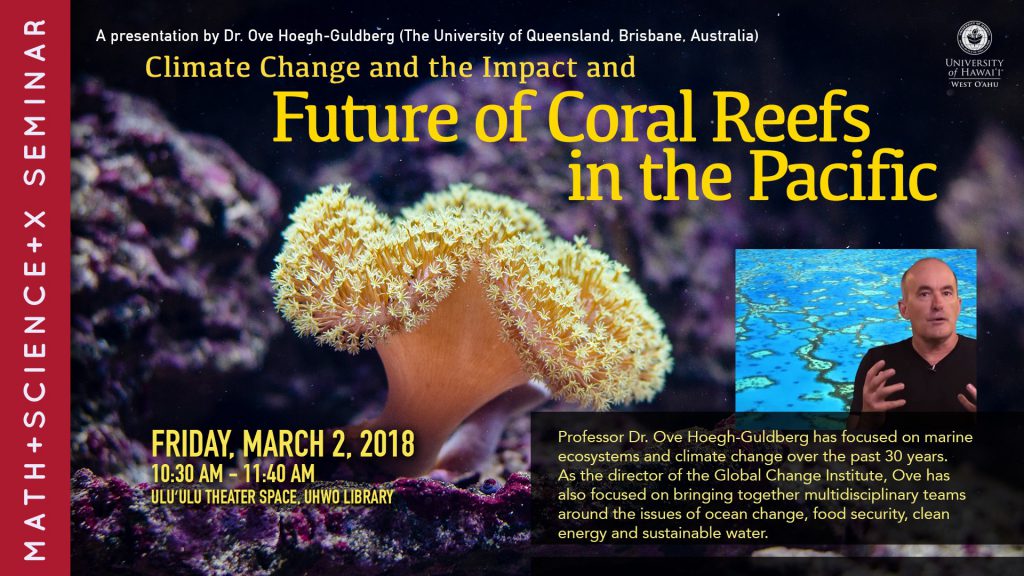 Dr. Ove Hoegh-Guldberg, the inaugural director of the University of Queensland’s Global Change Institute and a professor of Marine Science, will give a Math + Science + X presentation titled “Climate Change and the Impact and Future of Coral Reefs in the Pacific,” from 10:30-11:40 a.m., Friday, March 2, in the ʻUluʻulu Exhibition Area. The talk is also presented by UH West Oʻahu’s Distinguished Visiting Scholars Committee.

Hoegh-Guldberg, who has held positions at UCLA, Stanford, and the University of Sydney, is deputy director and chief investigator for the Australian Research Council Centre of Excellence for Coral Reef Studies.  He also is a member of the Australian Climate Group, the the Royal Society (London) Marine Advisory Network; and the Board of Editing Reviewers at Science Magazine. In 1999 he was awarded the Eureka Prize for his scientific research.

Hoegh-Guldberg is considered one of the worldʻs leading authorities on coral reefs and was elected an Australian Academy of Science Fellow in 2013. He was nominated for discovering the molecular mechanism behind coral bleaching during his PhD and early career. His discoveries have directly influenced global policy through their integration of the thermal physiology of corals with projections of future sea temperatures.

He is the chief scientist for the XL Catlin Seaview Survey, which has done work in Hawaiʻi.  In 2016 the survey’s marine scientists reported they were alarmed to see as much as half of the corals on the Big Island and other sites on Maui had died because of hotter-than-normal ocean temperatures.