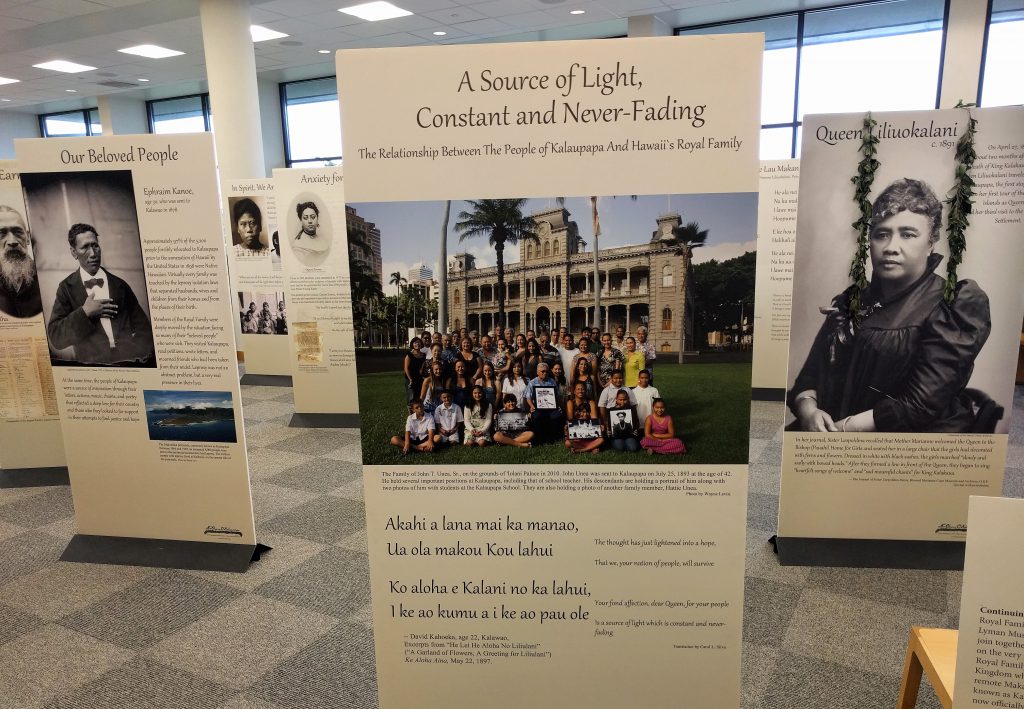 “A Source of Light, Constant and Never-Ending” is an exhibit by Ka ʻOhana o Kalaupapa and is on display at the UH West Oahu’s James & Abigail Campbell Library through March 10.

An exhibit about the often forgotten chapters of the history of Kalaupapa will be on display in the James & Abigail Campbell Library on the University of Hawaiʻi-West Oʻahu campus in January.

The historical exhibit sheds light on people who were quarantined to Molokaʻi’s Kalaupapa peninsula because they were afflicted with Hansen’s Disease (leprosy) through photographs, portions of letters written in Hawaiian, portions of songs, and other contextual information. Titled “A Source of Light, Constant and Never-Fading,” the exhibit’s 12 double-sided panels emphasize the strong relationship between the Kalaupapa residents and the aliʻi and other historical events often left out of traditional histories. The exhibit will begin Jan. 12 and end March 10.

The was created by Ka ʻOhana o Kalaupapa, a non-profit organization made up of Kalaupapa residents, family members/descendants, friends, students and others who have worked to preserve the history.  The award-winning exhibit focuses on chapters of history often overlooked, including the strong relationship between the people of Kalaupapa and the ali`i. 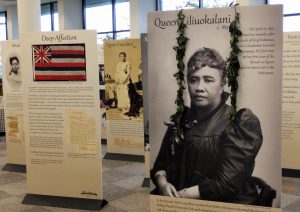 The use of Kalaupapa, a remote peninsula located below Molokaʻi’s imposing sea cliffs, served as a medical quarantine settlement for decades, with severely affected patients being sent to the island because there were no known cures for the disease. Native Hawaiians were particularly vulnerable to it, according to the National Park Service, which maintains Kalaupapa as a National Historical Park. Thousands of patients were taken away from their families and transported to Kalaupapa.  A Catholic priest, Father Damien, traveled to Kalaupapa in 1873 to minister and care for patients, and died on the peninsula in 1889 after contracting Hansen’s disease. Father Damien was canonized as St. Damien of Molokaʻi in 2009.

The forced quarantined has produced many compelling stories and comments, some of which are presented on the park service website. “One of the worst things about this illness is what was done to me as a young boy,” according to a part-Hawaiian patient. “First, I was sent away from my family. That was hard. I was so sad to go to Kalaupapa. They told me right out that I would die here; that I would never see my family again. I heard them say this phrase, something I will never forget. They said, ‘This is your last place. This is where you are going to stay, and die.’ That’s what they told me. I was a thirteen-year-old kid.”

Ka ʻOhana o Kalaupapa is a non-profit organization dedicated to remembering the people who were taken from their families and forcibly isolated at Kalaupapa because of government policies regarding leprosy. Over the past several years, the ‘Ohana has helped more than 700 family members learn about their Kalaupapa kupuna.

The group is dedicated to promoting the value and dignity of every individual who was exiled to the Kalaupapa peninsula beginning in 1866 because of fears about the spread of Hansen’s disease, which at its worst left people disfigured and with severe nerve, skin and eye damage.

In addition to the exhibit, there will be a public presentation titled “The Restoration of Family Ties,” on Jan. 25, at 6:30 p.m. in the library’s second-floor exhibit space. This narrated slide show featuring historical and modern-day photos chronicles the efforts of the ‘Ohana in helping families reconnect to their Kalaupapa ancestors. This presentation is open to UH West Oʻahu students, faculty, staff, and the general public. Descendants of Kalaupapa residents are also invited to attend a family discussion on March 10, at 10 a.m.