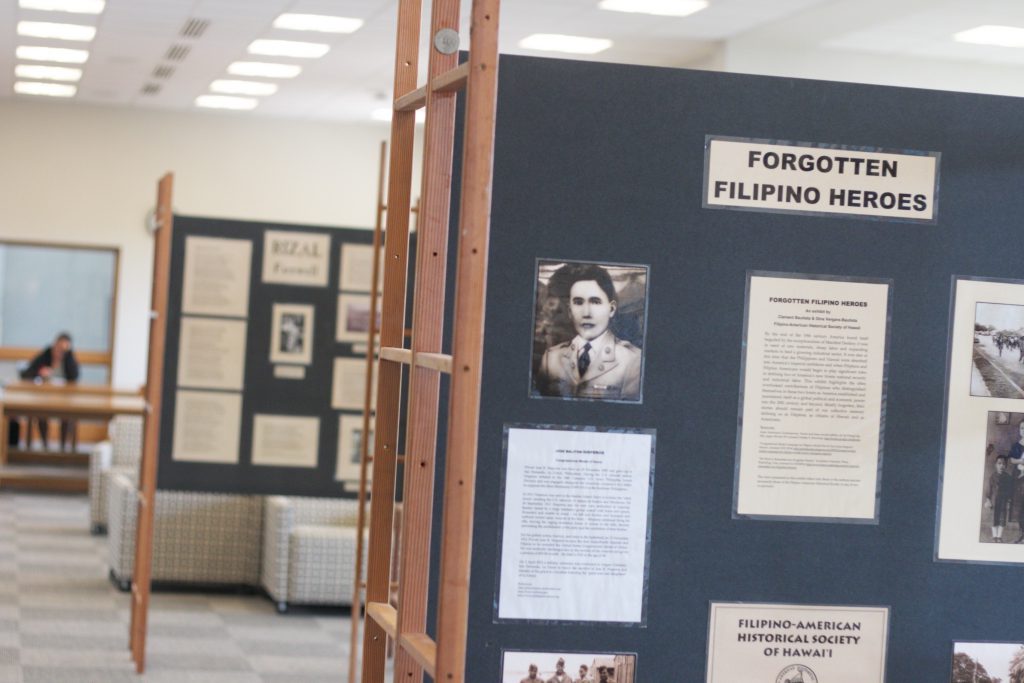 The exhibit runs through Oct. 30

An exhibit detailing the contributions of Filipinos is on display in the second-floor exhibition area of the UH West Oʻahu library.

The “Forgotten Filipino Heroes” exhibit is on loan from the Filipino-American Historical Society of Hawaiʻi and will run through Oct. 30.  The presentation notes that Filipinos have played significant roles in national security and industrial labor, noting 7,000 Filipino-Americans volunteered to retake the Philippines from the Imperial Army during World War II, but their effort is often forgotten.

Students, faculty, and staff with an interest in Filipino history may find the exhibit compelling.  Enrollment numbers for Fall 2016 show there were 586 students of Filipino ancestry at UH West Oʻahu, representing the second-largest ethnic group among the student body behind Hawaiians or part-Hawaiians. Pictures and stories of 10 heroes are presented, including Congressional Medal of Honor winners and labor activists who sought better conditions for workers.

“This exhibit highlights the often overlooked contributions of Filipinos who distinguished themselves in these two fronts as America established and maintained itself as a global political and economic power into the 20th Century and beyond,” says one of the exhibit displays authored by Clement Bautista and Gina Vergara-Bautista.

“Mostly forgotten, their stories should remain part of our collective memory, defining us as Filipinos, as citizens of Hawaiʻi, and as Americans.”

Besides the role played by Filipinos in military conflict, the exhibit also presents the stories of Filipino labor leaders who fought for better wages and benefits such as Calixto “Carl” Damaso, who served as president of ILWU Local 142, and Pablo Manlapit, a pioneering labor organizer in Hawaiʻi.

The exhibit also includes a section devoted to national heroes of the Philippines: José Rizal, a nationalist and writer, and Apolinario Mabini, another Filipino revolutionary leader who became the first prime minister of the Philippines, are highlighted in the exhibit.