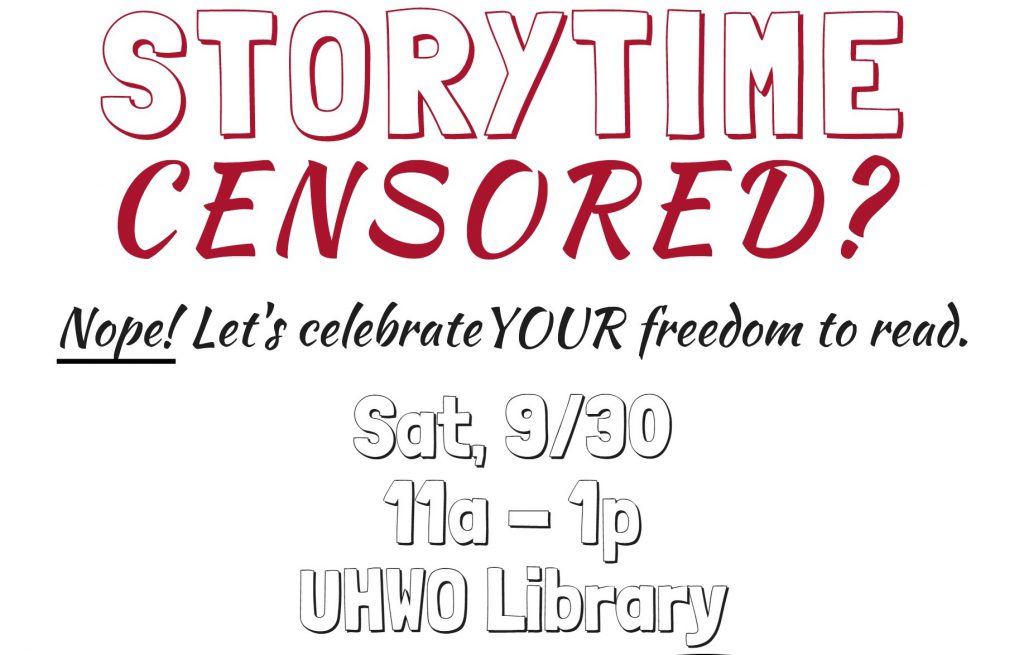 Storytime Censored? Nope! is scheduled for the UHWO Library

The Education Club at UH West Oʻahu will celebrate the freedom to read and call attention to the ongoing battle of censorship on the last day of Banned Books Week 2017, when it holds “Storytime Censored? NOPE!” at the campus library from 11 a.m. to 1 p.m. on Saturday, Sept. 30.

Cherished childhood classics that were once challenged and/or banned will be honored during the event, which is billed as a time for stories, songs, and crafts.  The event is open to everyone.

“Alice in Wonderland” by Lewis Carroll, “The Adventures of Huckleberry Finn” by Mark Twain, and “Where the Wild Things Are” by Maurice Sendak are just some of the books that were banned at one time or another, according to the Banned Books Week Coalition.  The group is supported by the American Library Association, the National Council of Teachers of English, the Association of American Publishers and others.

The coalition seeks to shine a light on censorship through education, advocacy, and creation of programming about the problem of book censorship. “Of Mice and Men” by John Steinbeck (profane & uses God’s name in vain), “Their Eyes Were Watching God” by Zora Neale Hurston (sexually explicit), and “The Catcher in the Rye” by J.D. Salinger (anti-white and obscene) are just some of the books that have battled censorship attempts at one time or another, according to the American Library Association. The purpose of Banned Books Week also is to celebrate our freedom to read.

For more information and to RSVP: https://freetoread.eventbrite.com/