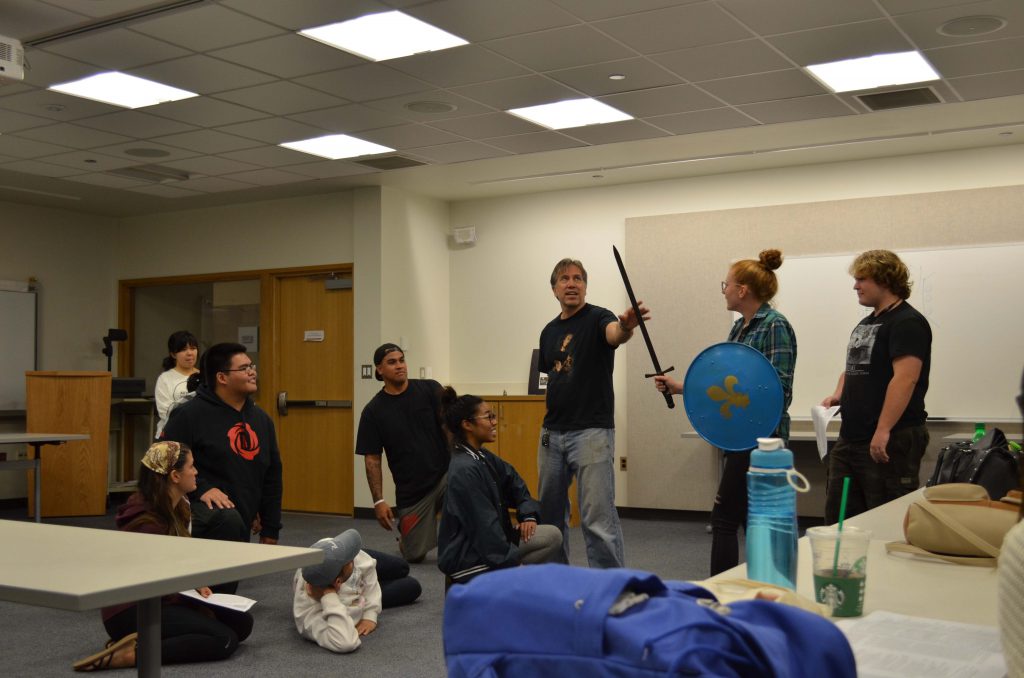 UH West Oʻahu students in Dr. Brenda Machosky’s ENG445 class are learning about Shakespeare’s famous works not only through reading, analysis, and discussion, but through performance. In April, the class worked with premiere fight choreographer Tony Pisculli and staged a fight scene from Shakespeare’s “Richard III.” The purpose of the exercise was for students to better understand the unwritten material in a Shakespeare play, and how to find cues in the text that show relations of power and control.

“The scene staged from ‘Richard III’ is not typically a fight scene, but Tony showed the class how a fight scene made sense and also intensified what was transpiring through the words of the text and interaction between Richard and Anne,” said Machosky. “I teach Shakespeare as a performance text, focusing on the language but always with attentiveness to all of the issues of performance, including the fact that all of the roles were played by men and boys (cross-dressed to play the female parts).”

Tony Pisculli is Hawaiʻi’s premiere fight choreographer, and has been teaching stage combat and choreographing fights for more than 20 years. He is a master teacher with Dueling Arts International and has won multiple Poʻokela awards for his choreography. Pisculli has worked with every major theater on Oʻahu and choreographed fights for dance, opera, theater, short film, television and burlesque. He teaches regular classes at Diamond Head Theatre and is co-founder and producer of the Hawaii Shakespeare Festival. Pisculli choreographed the fencing scenes in the Hawaii Shakespeare Festival touring production of “Hamlet” that was performed at UH West Oʻahu on April 26.