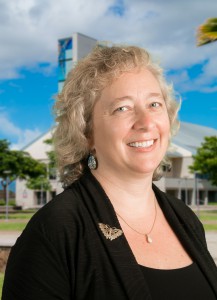 UH West Oʻahu Associate Professor of English, Brenda Machosky, delivered the keynote address for a seminar, Rethinking Allegory, held at the University of London’s Warburg Institute on Oct. 30. Her keynote presentation addressed the conference theme, “Why we need to rethink allegory.” She argued that allegory really is everywhere, and that we ignore the use of allegory at our peril. The ways in which language says something other than it means is used in literary texts, like Spenser’s voluminous The Faerie Queene, but also stealthily in more contemporary and everyday contexts, in political documents and laws, like the USA PATRIOT Act.

Dr. Machosky also conducted a seminar on Australian Gwion Gwion cave art at the University of Warwick on Oct. 28. She presented her recent work in Australia on the Gwion Gwion cave art of the Kimberley region, the oldest rock art in Australia, and an object of much contention in anthropology and art history. Again insisting on the valuable use of allegory, Machosky argued that we need to suspend the aesthetic desire to make these images mean in a western epistemology, and instead experience them as they are and refrain from ascribing meaning to what we really cannot know.

Dr. Machosky specializes in allegory and has redefined the term as absolutely fundamental to literature, art, and language. In 2013, she published Structures of Appearing: Allegory and the Work of Literature with Fordham University Press. She also edited a collected essay volume, Thinking Allegory Otherwise with Stanford University Press (2010).