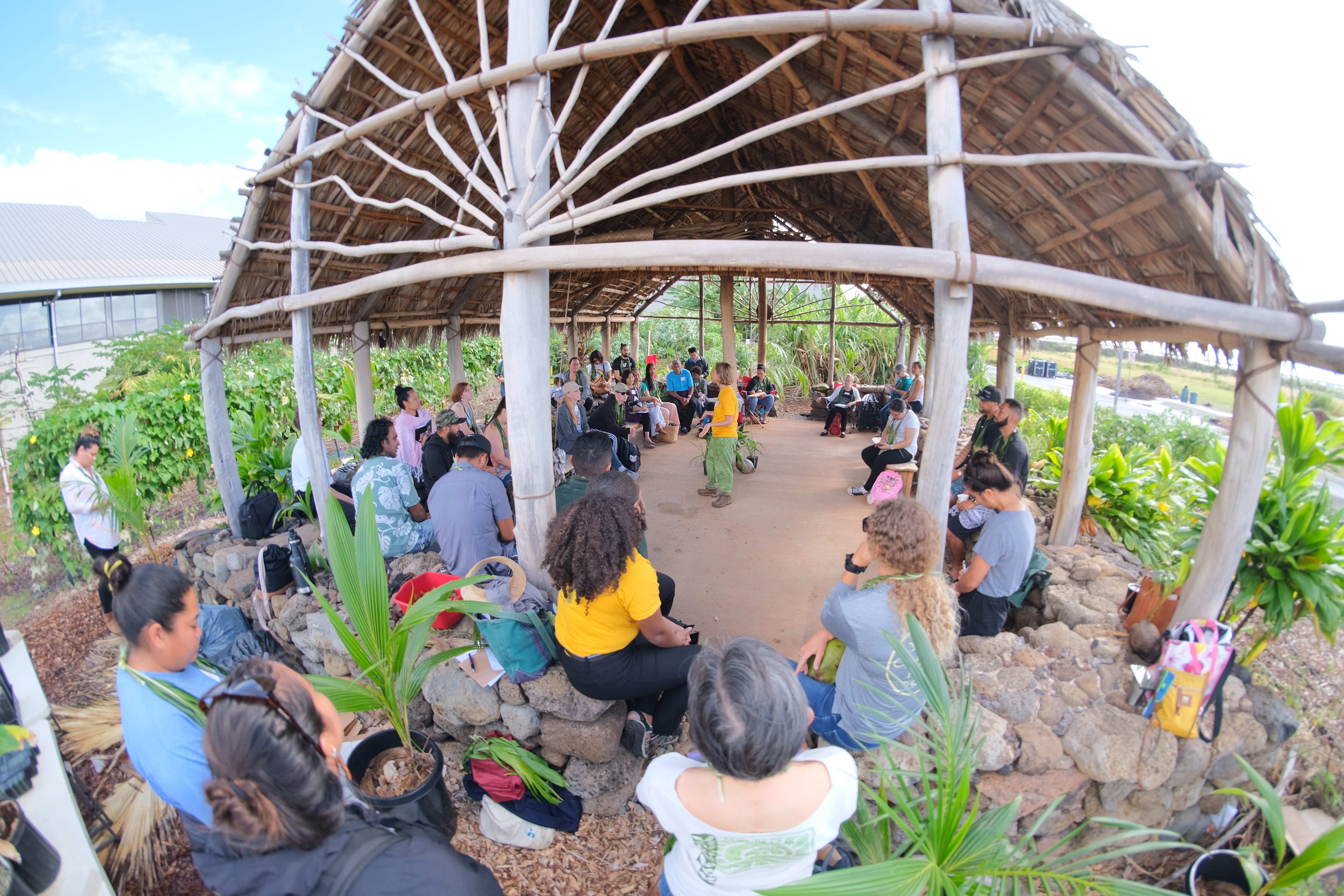 ʻAha ʻĀina Aloha attendees gather for a session at the Hale Kuahuokalā within the Student Organic Garden.

Nearly 200 community members, scientists, cultural practitioners, storytellers, and colleagues gathered today at the University of Hawaiʻi–West Oʻahu to honor the land – the way it educates, inspires and instructs – at the third annual ʻAha ʻĀina Aloha event.

Coordinator Dr. Manulani Aluli-Meyer noted the event was not a conference, but an ʻaha – a capacity to meet, to befriend people.

The day began with guests being greeted with ti leaf lei provided by the UH West Oʻahu Aloha ʻĀina Student Service Club and the singing of “Mele Honouliuli” by UH West Oʻahu faculty and staff.

“Those of us who gathered here, gathered here because we love the land,” UH West Oʻahu resident kupuna Aunty Lynette Kaopuiki Paglinawan said in her welcome remarks.

UH West Oʻahu Chancellor Dr. Maenette Benham also welcomed attendees and shared a cherished memory of spending time as a little girl with her grandfather, a fisherman, in Kaʻaʻawa.

“We have to remember that today, as you go through all of your different panels, presentations and conversations, is that feeling – that kanaka ʻāina connection of feeling the embrace of this place that is part of all our DNA – is so very important to all of us … to the many generations to come,” Benham said.

Among the first guest speakers was Andrew Robbins, CEO of HART, who provided an update on the rail project.

“(We are) going to be connecting most of the major campuses across the island, right here with our Keoneʻae Station that you can see off in the distance, but also Leeward Community College, Honolulu Community College (and eventually) UH Mānoa,” Robbins shared. “So just think about that: students, faculty can transfer very quickly and seamlessly between campuses.”

In addition to providing mobility with the rail, “we also hope to contribute to telling the story of the host culture here,” Robbins emphasized, highlighting features such as Hawaiian station names and interpretive signage at every station.

Attendees of ʻAha ʻĀina Aloha were able to choose to participate in one of three themes:

Jennifer Champion, a stay-at-home mom and former preschool teacher, attended ʻAha ʻĀina Aloha with her sister and their two young sons. Champion signed up for the Uluniu Project Partnerships! session, which took place at the Student Organic Garden.

“We thought it would be a great opportunity to see and learn more about what’s going on out here,” the Ko ʻOlina resident said.

Champion and her sister were especially interested in hearing from guest speakers with Mālama Learning Center – a non-profit organization that brings art, science, conservation, and culture together to promote sustainable living throughout Hawaiʻi – and “to just learn more about the Hawaiian culture through the land,” Champion said as her son, 2-year-old Makoa, played nearby.

“And we love being able to find ways to get the boys more involved with the ʻāina,” she said.