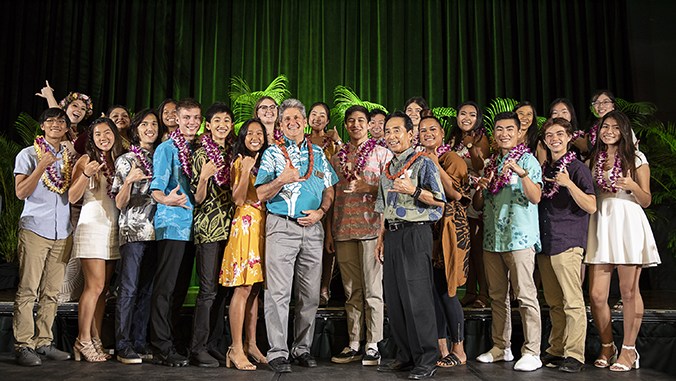 Thirty promising high school and college students were honored on July 18, as the 2019 University of Hawaiʻi Regents and Presidential Scholars during an awards ceremony at the UH Mānoa Campus Center Ballroom. The scholarship program was created in 1987 and has attracted some of Hawaiʻi’s best and brightest.

Raganit, who has yet to select a major, was one of 20 recent high school graduates receiving the Regents Scholarships that are given to incoming freshmen by the University of Hawaiʻi Board of Regents to students with a record of outstanding academic achievement. Regents scholarships are given to freshman who achieved a SAT total score of at least 1340 or ACT combined score of at least 29, and maintained at least a 3.5 GPA in academic subjects in high school, and whose extracurricular achievements are shown to be remarkable.

Raganit said he decided on UH West Oʻahu because of its new facilities and more affordable tuition compared to University of Hawaiʻi at Mānoa. 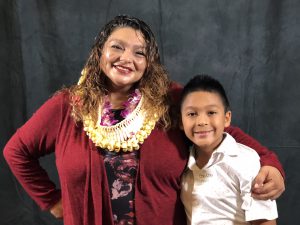 Marie Villareal, a single mother who was awarded a Presidential Scholarship, will be moving to Oʻahu with her seven-year-old son.

“I find this school attractive because of its convenient location,” Raganit said in an email.  “I’m very grateful for having won the scholarship.”

Villareal was one of 10 college juniors attending a UH campus that received the Presidential Scholarship, which is given to students to have a minimum cumulative GPA of 3.7 for all college level work, a record of sustained progress in academic courses, and evidence of superior academic achievement or creative endeavor. Villareal graduated from UH Maui College in the spring and will be moving to Oʻahu with her seven-year-old son to attend UH West Oʻahu.

“It’s just an honor that a university would believe in me and that a university would trust me with this huge honor,” Villareal said, explaining that she has a cognitive learning disability and takes a little longer to process information compared to other students. “The Presidential Scholarship, wow, you know. What kind of college does that – to give a Presidential scholarship to a person with a learning disability.”

Villareal said she plans to study Disaster Preparedness & Emergency Management at the Kapolei campus, and that she was sold on the concentration when she dialed Dr. Ross Prizzia’s number that was included on the back of a pamphlet.  She said she was shocked with Prizzia, a faculty contact for the program, picked up the phone and answered the questions she had.

“I could tell he honestly cared about students,” Villareal said. “That’s when I knew.”

She said her goal is to become an emergency management officer and give back to “this beautiful, beautiful state.” Villareal did not graduate from high school, but attended the McKinley Community School for Adults and earned a high-school equivalency credential.

“I grew old dreaming about college,” Villareal said. “Here I am almost 50 years old and I am now living that dream.”