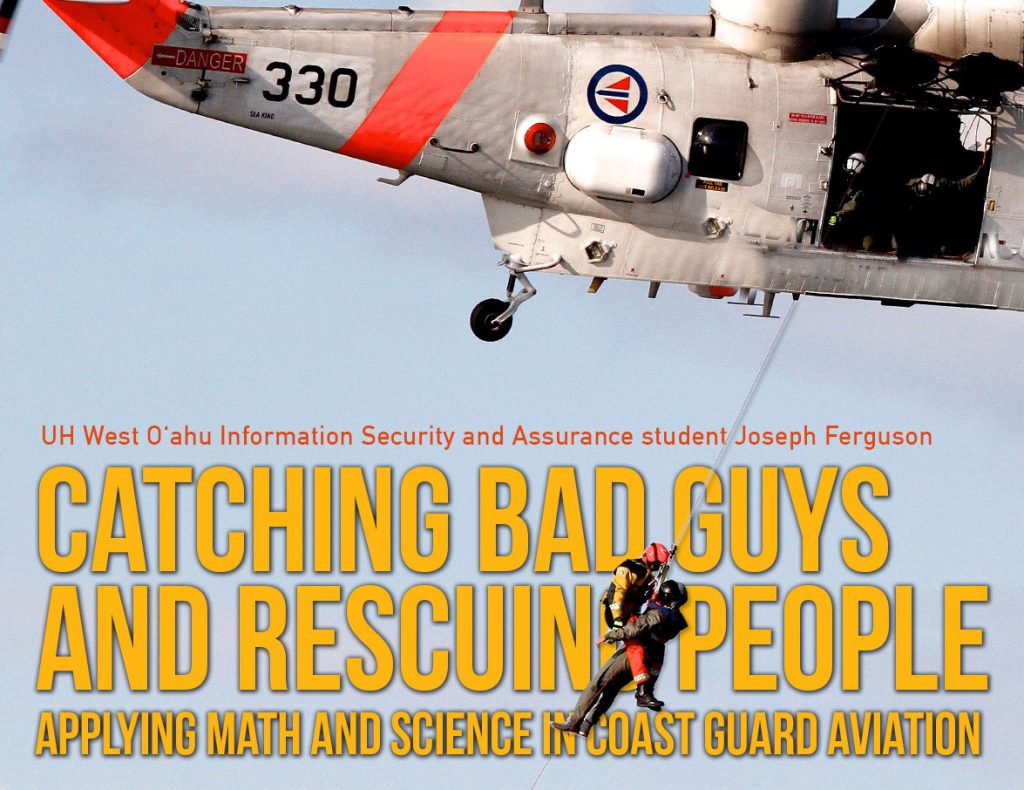 Ferguson’s talk is scheduled for 10 to 11 a.m., Friday, April 5, in room E135. Ferguson will describe some of the tactics and techniques used in search and rescue and law enforcement operations and how math and science played a giant role in the success of the missions. Much of this will be told through actual pictures and footage of missions flown during his career.

Ferguson recently left the U.S. Coast Guard, where he served for nine years, for civilian life and a career in Information Technology. Currently he is a full-time student at UH West Oʻahu, studying Information Security and Assurance, while working part-time as a Help Desk Technician for Hawaii Tech Support; the lead IT consultant for Leeward Community Church; and as a reservist for the Coast Guard as an Information Systems Technician.

Ferguson served six- plus years in Coast Guard Aviation, primarily as a mechanic and crewmember on HC-130 aircraft, the extended range version of C-130 Hercules aircraft.

As an Avionics Electrical Technician his job primarily consisted of maintaining and repair of the electrical systems on the C-130 aircraft. Ferguson also served as a navigator on the C-130, supporting the pilots in flying the plane and navigating during missions. This included coordinating flight plans and making sure the aircraft computer systems were functioning and programmed correctly; running the radar systems during search efforts; and operating the majority of radio communications during flights.

Ferguson’s service included flying in Alaska and Hawaiʻi and traveling through much of the Pacific. He supported Search and Rescue operations from the Bering Sea to French Polynesia, and flew over 1200 hours of mission time. Many of the missions flown were in support of Law Enforcement from fisheries and commercial trade to drug interdiction in Central America.