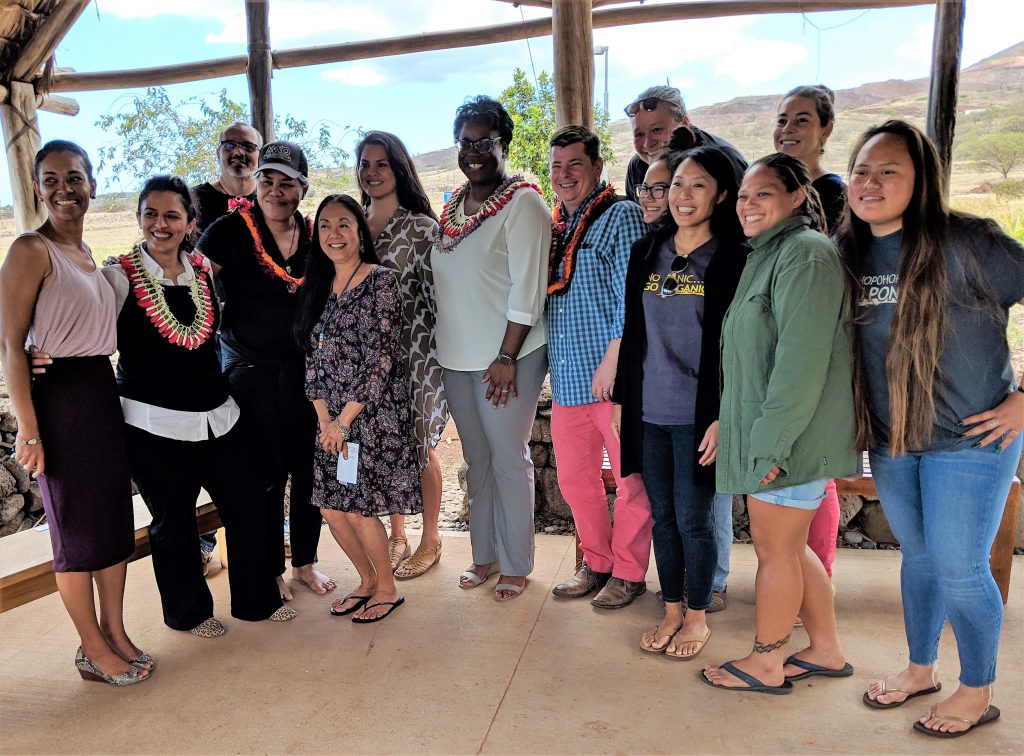 The representatives, accompanied by MAʻO Executive Director J. Kukui Maunakea-Forth and others from the farm, were greeted with the singing of Mele Honouliuli led by UH West Oʻahu’s Dr. Manulani Aluli-Meyer at Hale Kuahuokalā, where the discussion took place. Traveling from the foundation’s Battle Creek, Michigan offices were Program-Related Investments Officer Andrew Brower and Family Economic Security Program Officer Tameshia Bridges Mansfield, as well as Tina Castro, managing partner of Avivar Capital, a consultant to the foundation.

The presentations sought to illuminate the underpinnings of the SCFS program and how this relates to the broader community and world. The program takes a transdisciplinary approach in tying indigenous ways, community health, Western agricultural science and agroecology into curriculum. It also links to UH West Oʻahu’s Health Sciences program, applied mathematics courses, and political science program.

MAʻO (Māla ʻAi ʻŌpio, or the garden that grows young people) played a role in helping establish the SCFS program, which represents a university-community collaboration designed to solve a range of social, economic and ecological issues.  MAʻO has a paid college internship program that provides employees a pathway to a four-year degree.

Speakers included Tasia Yamamura, Student Organic Garden manager, who explained how various programs give people a better understanding of where their food comes from. This includes UH West Oʻahu students who can work in the garden, field trips of K-12 students who learn about farming and careers, or people in the community who can come during workdays to learn about soil, cultivation and harvesting of food.

SCFS’ Dr. Daniel “Bubba” Lipe discussed how indigenous knowledge is being integrated the SCFS program through courses such as one on Hawaiian natural resource management in ahupuaʻa (land division usually extending from the mountains to offshore), Hawaiian fisheries management, and farming systems from an ecological perspective. He said subject matter can be tied to practices by other indigenous groups, such as fishery management by native Americans.

Elise Leimomi Dela Cruz-Talbert, an SCFS lecturer, talked about how SCFS is a unique program that addresses more than just food. It has a community health aspect and provides knowledge for students to make changes in their community, whether it be growing their own food, addressing poverty, or becoming healthier by eating food they’ve harvested.

The W.K. Kellogg Foundation was founded in 1930 by Will Keith Kellogg, who became wealthy after pioneering the process for making flaked cereal. The foundation is one of the largest U.S. philanthropic foundations and works with communities to create conditions for vulnerable children so they can realize their full potential in school, work and life.