Feelings of pride mutual between mother and daughter, both UH West Oʻahu grads 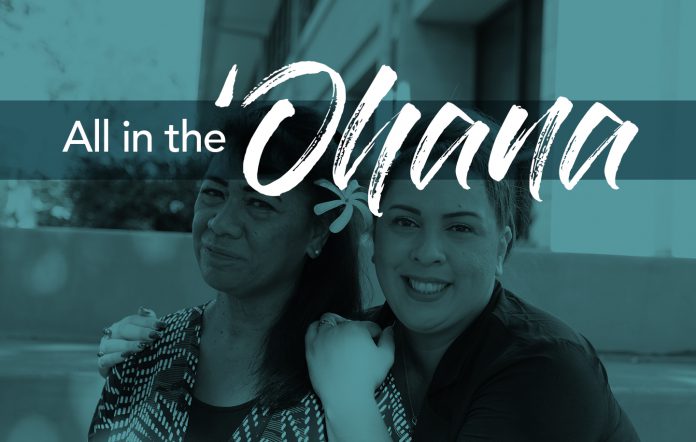 “All in the ‘Ohana” is a new series of stories that celebrates families who share a special connection with the University of Hawai‘i–West O‘ahu as students, graduates, employees, or alumni. The series will run throughout the spring 2023 semester.

Kimberly Reed was bursting with pride as she watched her mother — one of two graduating students selected to address classmates and guests at the Fall 2022 Commencement — deliver a moving speech and walk across the stage to accept her diploma.

Abbie Kahula Reed, 63, a mother of four and grandmother of five, received her Bachelor of Arts in Creative Media with a concentration in Communications and New Media Technology.

“I knew mom set the bar high for herself to prove to her legacy that we can do it, too,” said Kimberly, 39. “My tears were from realizing that all the hard work she did was for us and our future.”

Five years earlier, the roles were reversed — it was Abbie who proudly watched her daughter Kimberly at UH West O‘ahu’s Spring 2017 Commencement, where she received her Bachelor of Arts in Public Administration with a concentration in Health Care Administration and a Certificate in Disaster Preparedness and Emergency Management. Kimberly now works at UH West O‘ahu as an administrative and fiscal specialist for Title III Grants ‘Upena Moananuiākea and Wailau Ola Pathway.

Abbie shared how her daughter’s graduation in 2017 played a part in her consideration to return to school in 2018.

“She inspired me,” Abbie said. “If she could do it while managing a challenging career and two children on her own, then I knew I could do it, too.”

Kimberly’s experience at UH West O‘ahu, which began when she enrolled as a student in fall 2014, was a positive one — and still is.

“I was never alone in my journey at UH West O‘ahu,” Kimberly said. “I was surrounded by UH West O‘ahu ‘ohana who supported me every step toward my bachelor’s degree and are still behind me as I work on my master’s degree.”

So years later, when her mother was considering a return to college, Kimberly encouraged her to attend UH West O‘ahu.

“From first-hand experience, I knew the campus environment and guiding faculty would support her journey as it had done for me, without a doubt,” she said.

Kimberly recalled how she received the same kind of loving encouragement from her mother when she started her college career.

“At first, college was not on my mind, but my mom showed me the possibilities of what life in college could be,” Kimberly said. “Mom got in my head and I’m so glad she did. In turn, I reciprocated. It was a ‘win–win’ for us both.”

“My daughter Kim was my rock of support whenever there was self-doubt,” Abbie said. “She held me accountable for achieving above and beyond, and did not let me stray from the expectations and goals I dreamed of for myself.”

Now an entrepreneur, digital storyteller, and content creator, Abbie said when she enrolled at UH West O‘ahu back in fall 2018, she didn‘t even know how to take a photo with her phone.

“I needed to learn new digital skills to help me become a better storyteller and content creator to fulfill a dream and make a difference,” she said.

Like Kimberly, Abbie is grateful for her time at UH West O‘ahu.

“My college experience at UH West O‘ahu was a magical journey of new learning and beginnings,” Abbie said. “Every road on this journey was filled with exciting first-time surprises and exciting new challenges, which helped me define the purpose for which I was put on earth.”

For the two women, both Kapolei residents, UH West O‘ahu was the right fit.

Father and son making memories together at UH West Oʻahu

“All in the ‘Ohana” is a new series of stories that celebrates families who share a special connection with the University of Hawai‘i–West O‘ahu...
Read more
West O‘ahu Happenings

When Nyle Jordan Ocariza takes to the podium at the University of Hawai‘i–West O‘ahu Fall 2022 Commencement, he hopes to remind his fellow graduating...
Read more
West O‘ahu Happenings

Commencement student speaker’s grandchildren are her ‘why’

Ask Abbie Kahula Reed the reason she persisted and excelled throughout her academic journey at the University of Hawai‘i–West O‘ahu, and she’ll name five...
Read more