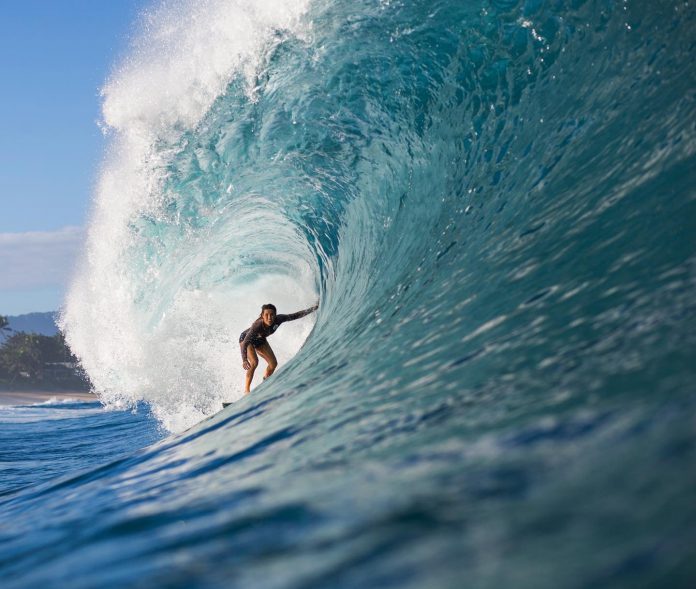 The Billabong Pro Pipeline is the kickoff event of the World Surf League (WSL) 2022 Championship Tour season where, for the first time, every stop will feature both women and men, according to a WSL press release.

When Jones Wong graduated from UH West Oʻahu in spring 2021, she was the first graduate of UH West Oʻahu’s Bachelor of Applied Science–Hawaiian and Indigenous Health and Healing (HIHH) program.

The HIHH concentration, introduced in fall 2019, strives to create a pathway for the dissemination of traditional healing knowledge and skill that will serve as a model for other indigenous groups.

In a story published last year highlighting her academic achievement, Jones Wong said that as part of her graduation requirement, she presented a senior project titled, “Surfing: More Than a Sport.”

“Surfing is my passion,” she said in the story. “That is what I am best at.”

Jones Wong, who is part Hawaiian, continued, “I feel so connected to my culture, my ancestors, and the ocean when I am out there. Surfing gave me my identity. It empowered me. In my hardest times I found peace in the ocean.”

Her senior project was about how surfing empowers Native Hawaiians to connect to their culture. It was a topic she was happy to write about and present, she said, because many people don’t talk about it and don’t realize how significant surfing is to Native Hawaiians.

“It is much more than a sport to us,” she said.

“Nothing beats pulling into a big barrel at Pipeline,” she said. “I feel so connected, so happy, and so alive. It’s a feeling that I can’t describe. Nothing beats it.”

Get the 411 on health degrees from University of Hawaiʻi–West Oʻahu faculty and students at two informational sessions, 4:30 to 6 p.m., March 31...
Read more
Class Act

Work of Dr. Miles and collaborators to be published in international food systems journal