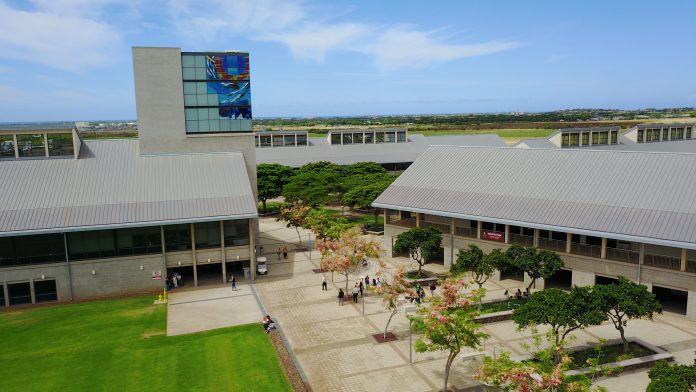 The Department of Homeland Security (DHS) awarded the University of Hawaiʻi–West Oʻahu $780,000 for its efforts to create threat assessment and management teams, and bystander training. The award is part of the Department’s grant program that aims to strengthen the nation’s targeted violence and terrorism prevention capabilities.

DHS announced on Sept. 27 the awarding of 37 grants, totaling $20 million — including UH West Oʻahu’s grant award of $780,671 — under the Fiscal Year 2021 Targeted Violence and Terrorism Prevention (TVTP) Grant Program, according to a press release.

“Domestic violent extremism and targeted violence pose significant and persistent threats to our homeland,” Secretary Alejandro N. Mayorkas said in the release. “Attacks on schools, houses of worship, workplaces, and public gatherings threaten Americans’ lives and inflict trauma on our communities. The Targeted Violence and Terrorism Prevention Grant Program prioritizes investments that empower and equip communities across our country to prevent acts of violence before they occur.”

Bev Baligad, principal investigator of the UH West Oʻahu grant, said the use of Behavior Intervention/Threat Assessment Teams (BITATs) within K-12 schools and higher education as a means to identify, assess, intervene, and manage threats have become a national best practice in the prevention of targeted school violence within the United States.

According to a description on the TVTP Grant Program webpage, UH West Oʻahu intends to create and build BITATs and a bystander intervention program designed specifically for the needs of the diverse population, culture, and environment of Hawaiʻi. Additionally, training programs, ongoing collaboration, networking with other teams, and programming to help encourage the community to safely intervene, when necessary, will build a “spider’s web” of threat assessment and capacity that stretches across the state.

Building, strengthening, and supporting BITATs within schools, along with localized bystander intervention programming that promotes the sharing of information and positive intervention within the community, will serve as the basis for the catalyst that propels the state threat assessment efforts forward.

The description on the page continues, “This applicant (UH West Oʻahu) fulfills the grant program priority to achieve geographic diversity and the panel review noted the expertise of the applicant and the strength of the program design.”

The DHS press release states that the TVTP Grant Program is managed by DHS’s Center for Prevention Programs and Partnerships (CP3) and is the only federal grant program dedicated to enhancing the capabilities of local communities to prevent targeted violence and terrorism. This year’s grant program prioritized the prevention of domestic violent extremism, including through efforts to counter online radicalization and mobilization to violence.

The Fiscal Year 2021 TVTP grants expand on the Department’s new approach to prevention, which centers on providing local communities with evidence-based tools to help prevent violence, while protecting civil rights and civil liberties and privacy rights. These grants will help local communities strengthen online and in-person prevention efforts, including by addressing early-risk factors that can lead to radicalization and violence.

Welcome to a series that highlights the services the University of Hawaiʻi–West Oʻahu offers to help our students succeed. Student Support Spotlight will profile...
Read more
Spotlight

Welcome to a new series that highlights the services the University of Hawaiʻi–West Oʻahu offers to help our students succeed. Student Support Spotlight will...
Read more