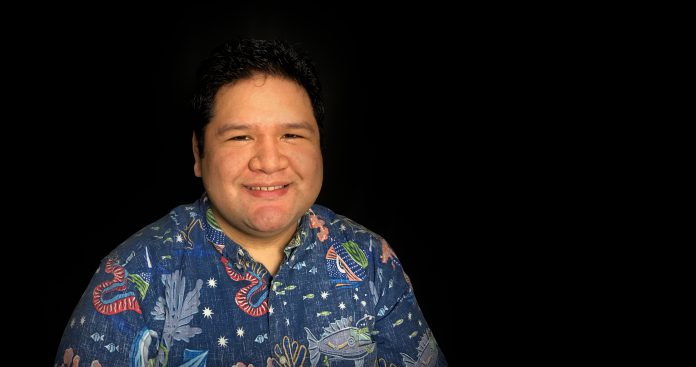 To his students, Dr. Michael-Thomas Foumai is a lecturer with the Academy for Creative Media at the University of Hawaiʻi–West Oʻahu, imparting knowledge to them about the integration of music and sound with speech and image in creative media.

To the Hawaiʻi Symphony Orchestra, Foumai is the brilliant young composer featured in its Sheraton Starlight Series, showcasing a festival of Foumai’s music over the next few months with in-person, outdoor performances at the Waikīkī Shell. The series began May 14 and runs throughout the summer.

In a first for a Hawaiʻi composer, Foumai will have a total of seven of his orchestral works and new arrangements of mele by Queen Liliʻuokalani performed by the symphony.

“Orchestras do spotlight composers’ works in a festival treatment, but that honor is often bestowed upon the likes of Mozart and Beethoven only, titan composers long passed,” Foumai said. “If one is lucky, a single performance of an orchestral work in a year, or even several years, is generally the experience today. So to have seven big works and new arrangements spread across seven concerts in a single series, the gravity of these concerts is immense.”

This speaks to the symphony’s extraordinary commitment to new symphonic music and the composers of Hawaiʻi, said Foumai, who teaches Creative Media/Music 314 Music, Sound and Media at UH West Oʻahu.

“Our Creative Media and Music students are truly fortunate to have such a dedicated and accomplished instructor,” said Dr. Jon Magnussen, associate professor of Music and chair of the Humanities Division at UH West Oʻahu. “He makes our community proud.”

The performances with the Hawaiʻi Symphony over the next few months are monumental, Foumai said.

“I’m floored, speechless, and thrilled,” he said. “This really is unheard of and unprecedented.”

The concert series features the following Foumai works, all composed in the last decade. Much of the music has a story to tell, Foumai said, and is inspired by cinema, cartoons, poetry, literature, history, and Hawaiʻi:

“Almost all these works will be Hawaiʻi premieres,” Foumai added. “Many of these works were written for and performed by orchestras across the country, so I’m grateful for the opportunity to have these works performed for the first time right here at home with our own Hawaiʻi Symphony.”

He continued, “In addition, I’ll be framing each concert with program notes that will give the audience a composer’s perspective and a glimpse at the hidden musical messages and symbolisms in each work.”

For more information or to purchase concert tickets for the Sheraton Starlight Series, which is sponsored by Sheraton Waikīkī, visit the Hawaiʻi Symphony Orchestra website.

The University of Hawaiʻi–West Oʻahu was selected to participate in a new project focused on understanding the barriers to equity in opportunity and outcomes...
Read more
West O‘ahu Happenings

The U.S. Department of Veterans Affairs recently approved the University of Hawaiʻi–West Oʻahu as a training provider under a program that will help provide...
Read more
West O‘ahu Happenings

Seniors can prepare for commencement at three-day fest

University of Hawaiʻi–West Oʻahu's graduating seniors can get ready for the Spring 2022 Commencement at Grad Fest, from 10 a.m. to 2 p.m. on...
Read more