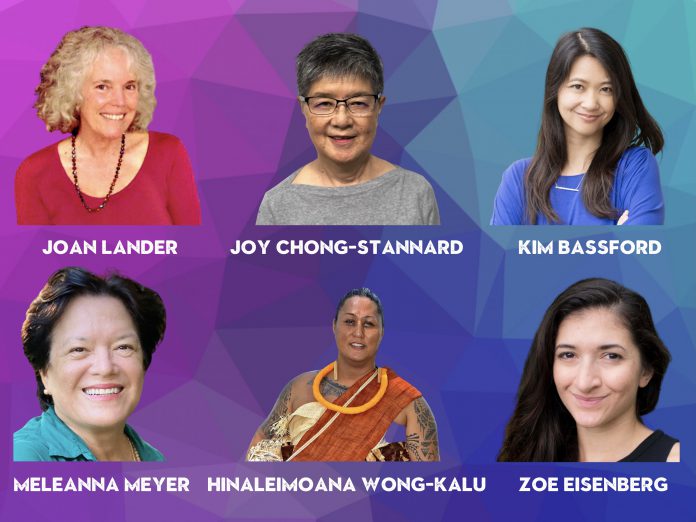 Hawaiʻi Women in Filmmaking, founded by Academy for Creative Media at the University of Hawaiʻi–West Oʻahu lecturer Vera Zambonelli, presents the world premiere of its third installment of “Reel Wāhine of Hawaiʻi” on Nov. 7 at the 41st Hawaiʻi International Film Festival.

Due to COVID-19 restrictions, the Hawaiʻi International Film Festival (HIFF) is hosting a hybrid event with both in-person screenings as well as an online festival from Nov. 4 to 28. Tickets are available at hiff.org.

Season 3 of “Reel Wāhine of Hawaiʻi” showcases the often untold stories of Hawaiʻi women filmmakers, celebrating the powerful and important work of pioneering women who paved the way to help build the local industry as well as new rising stars who continue to create groundbreaking work, according to a press release.

The season spotlights six new episodes that document the real-life stories of these filmmakers through a female gaze, while also redressing gender inequity in the male-dominated industry.

Zambonelli directed two of the six episodes and another episode was directed by Heather H. Giugni, cultural collections specialist and producer at ‘Ulu‘ulu: The Henry Ku‘ualoha Giugni Moving Image Archive of Hawaiʻi at UH West Oʻahu.

Those featured in the film series and the award-winning filmmakers who directed each film are:

“I love that filmmaking is such a great influencer, that it gives your message power and the ability to make change,” Giugni said in a press release. “It was such an honor to focus on Hinaleimoana Kalu-Wong, a Hawaiian beacon who reveals her truth, her courage, her force — her mana — through action and voice. I am grateful to Hawaiʻi Women in Filmmaking (HWF) for making this all possible by supporting women and young girls to tell more incredible stories.”

According to the press release, series producers Thompson and Zambonelli said at the core of this project is to tell the full story of Hawaiʻi filmmakers and to provide a space to feature the work of these women and have it documented for generations to come. In crafting these stories, the producers also began this project to cultivate a passion and eagerness for cinema among young women.

“We are here to create a brave and safe space for women and girls to connect, collaborate and support each other in telling stories and making sure that we pay attention not only to the stories, but also who’s telling those stories,” said Zambonelli, who is also the executive director of Hawaiʻi Women in Filmmaking.

Hawai‘i Women in Filmmaking is a feminist nonprofit organization committed to gender justice in filmmaking through an intersectional lens. HWF is celebrating its 10th anniversary in 2021 and continues to inspire young women to pursue film, giving them the tools and opportunities they need to succeed in the industry.

See the trailer for “Reel Wāhine of Hawaiʻi 3″:

Father and son making memories together at UH West Oʻahu

“All in the ‘Ohana” is a new series of stories that celebrates families who share a special connection with the University of Hawai‘i–West O‘ahu...
Read more
Spotlight

Feelings of pride mutual between mother and daughter, both UH West Oʻahu grads

“All in the ‘Ohana” is a new series of stories that celebrates families who share a special connection with the University of Hawai‘i–West O‘ahu...
Read more
West O‘ahu Happenings

The skills that University of Hawai‘i–West O‘ahu Academy for Creative Media graduate Keola Iseri learned throughout the past several years as a student helped...
Read more
West O‘ahu Happenings

More than 350 guests gathered on Nov. 18 to celebrate the grand opening of the $37 million Academy for Creative Media Student Production Center...
Read more