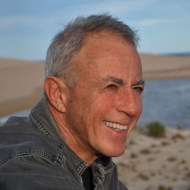 Louis Herman has spent over 20 years building up the political science program at UH West Oahu. He is founder and director of The Institute for a New Political Cosmology.   The mission of the Institute is to integrate indigenous wisdom, evolutionary science and political philosophy into a new story of what it means to be human living in synergy with an evolving earth.

Louis grew up in an orthodox Jewish community in apartheid South Africa in the aftermath of the Holocaust.  The two poles of his formative political experiences were shock at human caused suffering and the beauty and healing power of Southern Africa wilderness. At the age of 12 he left South Africa with his family to receive a rigorous science education in England. He obtained degrees in medicine and the history and philosophy of science at Cambridge University and then took a break from academia for three years to get some deeper experience of life.

He emigrated to Israel to explore life on a kibbutz—the agricultural commune which built the country—and then volunteered for military service in a paratrooper unit.   His participation in a Middle East war confronted him with two hard facts—the futility of war as a solution to political problems and the recognition of Palestinians as an indigenous population.  He returned to academia at the Hebrew University to contemplate the deeper questions of life—“How should we best live together?’ What is the Good Life?”

He was invited to complete his PhD at the University of Hawaii, where he found the perfect vantage for developing a global perspective on the human condition.  In 2013 he published Future Primal: How our Wilderness Origins Show us a Way Forward, which presents the politics of indigenous and early hunting-gathering societies as offering profound insights into truth seeking and righteous living which industrial society has lost touch with.

The Institute for a New Political Cosmology works to create an education and a political culture based on the primal truth quest. It presents such a truth-based way of life as the core of the leap in human consciousness our global crisis is calling for.

Dr. Herman is currently working on a number of projects for The Institute. These include a Hawaii-South Africa Wilderness leadership course, a documentary feature film Rewilding Leadership, and a book, The Truth Quest.